Fear Of The Dentist - How To Conquer It 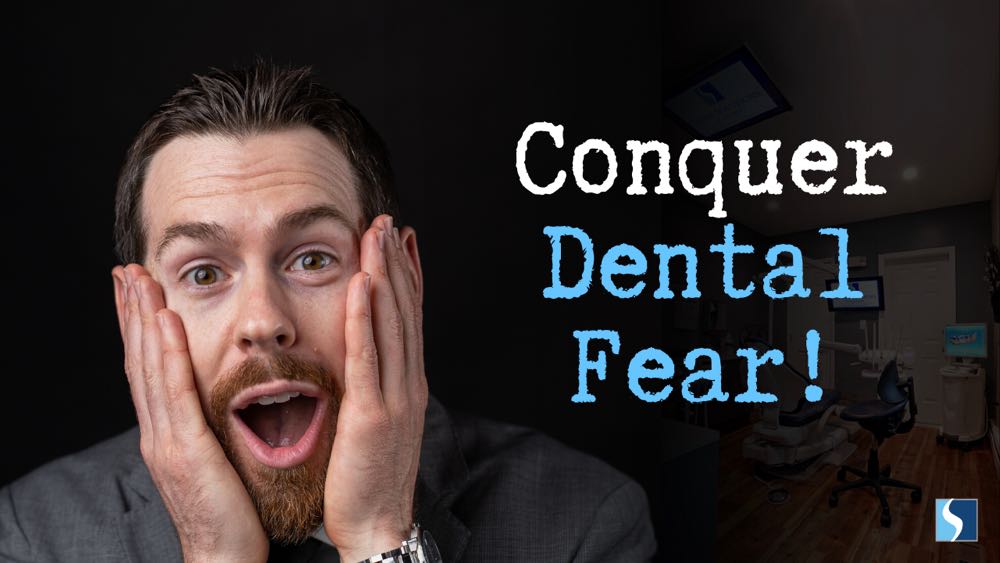 In this article I am going to cover the topic of dental fear. I'm going to talk about why it's there, what's real about the fear, what's not real about the fear and just kind of talk about, you know, what comes up for people in conversations that  I have with them when they are faced with making treatment  decisions.

I also want to talk about a specific patient recently  that we had to navigate this  fear aspect and so I want to share her story.

So I'm a transformational cosmetic dentist in Baltimore.  And I have patients who we do cosmetic dentistry for that,  you know, they're faced with making big decisions, big decisions  that can impact their life in a very profoundly positive  way. But, dental fear is one of those things that comes up  a lot and if we just kind of start with the sort of  general dental fear that's out there.

So many people are absolutely terrified of the dentist.  And actually that's, it's probably the number one reason that  people actually avoid going to see the dentist. Money is another  big one and time is a big one too.  But really fear is that thing that keeps people from from  making a decision that's that's a positive like going and seeing their dentist and just getting their regular check-ups or or whatever.

So fear, you know the thing about fear with dentistry is that there used to be a reason to fear dentistry.  I mean before the advent of modern anesthetics, dentistry was painful, dentistry was was really painful.  I mean there were there was a time when novocaine even first  came around where it was expensive and a lot of dentists weren't using it or they wanted to save money and they  wouldn't use enough of it.

So people have stories.  I remember my gram used to tell me every time,  every time I told her that I was going, that I was going to be a dentist that I was going to high  school. And even when I was in dental school to she would tell the story about her her dentist who when... my gram, my gram was one of ten children, and she she would always tell this story about going, she was at the dentist and he  would, he was smoking cigarettes while while you know, they  were in the office seeing patients. Nobody wore gloves at that time.  So there's no gloves obviously and he was he was an alcoholic and so he would so he you know, this kind of sets the scene  for this smoky, sort of dingy office where the the dentist is, you know, probably not a hundred percent there with what's  you know, how to take care of people  because he's inebriated and he would work on her and not  give her any aesthetic and just drill and drill and drill and she would scream and she this was her childhood experience.

She would tell me this story every time I brought up dental  school or that I wanted to be a dentist and so, you know, dental pain and the inability to take it away during  procedures used to be something that was real. Now,  Is there still dental pain? Yes, of course, there is people get toothaches.  And when people have toothaches it's very difficult to get them numb, but anesthetics have evolved, evolved to the  point where they're incredibly profound and ninety-nine percent  of the time we can take away through just local injections we can get people completely comfortable and even the injections themselves actually can be very comfortable. There's strong topical gels that we use ahead of time.  There's distraction techniques like shaking  while  we while we inject so a lot of that fear of those things that  were that their fear of things in the past. They're not fear of things that are real and in Modern Dentistry.  So there is that, you know, there's also the fear of pain  surrounding the procedure.

So this came up with a patient recently in the past  past couple weeks here where she was up against the big decision to make, make a decision to  really comprehensively pursue her oral health and get to a place of stability, replacing teeth, rebuilding wear, setting up her bite properly and having the added benefit of some cosmetics, and she was ready to go.

It wasn't the money.

It wasn't the time.

It wasn't any of that.

It was fear It of pain around getting the actual work done and pain afterwards and so she had some experiences in the past that she was drawing on and it was the reason for her fear, and so we had a long discussion about the different ways that we can make her comfortable, help her be comfortable.

She is getting treatment to the extent that she is really  going to be a VIP in our office,  so she's actually going to be the only patient in our office  when we are doing her treatment.  So she's gonna be fully comfortable is going to be nobody else around we're actually going to give her some medication  beforehand to relax her and and of course then use the most profound anesthetics that are made and so we sorta talked about that and making her comfortable during the appointment and  she came to understand like yes, I okay.

The second thing we had to overcome though was her fear of  pain after the fact and so she was drawing on an experience in the past where she had a crown done and she had a lot  of sensitivity afterwards and we sort of talked about the  fact that when you have a crown done a lot of times, a lot  of times not all the time,  there's significant amount of tooth structure that has to be  removed and most of the teeth that we were going to be doing restorative dentistry for were really veneers and and those veneers, veneers and composite, but, they're most of those are going to be very conservatively prepped.

So anytime we're doing a big case like this we get a 3D blueprint made up front. And you think why do we do that? Well, if you get a house made, you don't just have a contractor come out and they start building.  You get blueprints drawn and you revise those blueprints, and you approve those blueprints. A smile is no different.

So we get a blueprint done ahead of time. Just for planning purposes.  The other benefit of doing a blueprint is when it comes time to actually prepare the teeth.  We are using that final shape of the teeth, where we are going, that blueprint in 3D and we're using that to guide so that we only reduce, we only cut on teeth or roughen teeth in the precise areas where they need to be reduced.

There's not just blind going in there, let's grind them down the nubbins and then let's put crowns  or veneers on them. It is very controlled. It's very precise and it's very much dictated by the final outcome we're trying to achieve.

So we talked a lot in detail  about that and the fact that, again, after the appointment…so let me go back just a little bit here. Post-operative sensitivity and discomfort, a lot of times that's  dependent on the amount of or the aggressiveness of tooth structure removal.

So if we can be ultra-conservative with that, there's  going to be less sensitivity and less discomfort after the appointment. So the second thing is that we have medications, both over the counter and prescription that, that really, if you're  really struggling for a couple days for whatever reason, which is pretty rare after like a veneer appointment, we have medications to control that discomfort.  So ibuprofen and Tylenol alternating every three hours.

That actually, studies have shown that that is as strong as using Vicodin, regular strength Vicodin, and so that gets like 99%  of people if they're having some discomfort after the fact  that combination gets them comfortable.

So so we reviewed these things all these kind of tools we have at our disposal talked about how Modern Dentistry really does not have to be super aggressive with tooth reduction and she came to realize that, you know what?

“I can do this.  I can do this.”  And so it was, you know, it's one of those...one of those moments where a limiting belief or a false belief or a fear was really holding her back and we really had to dive deep into that to get to a place where she could say yes to being healthy, which is something that she wanted and desired to do.

So she's gonna go through the Smile Solutions Experience.  So, a lot of fun!

CLICK THE LINK BELOW to learn more about the Smile Solutions Experience and have the opportunity to schedule a FREE CONSULT.