Do my teeth need to be hacked down? 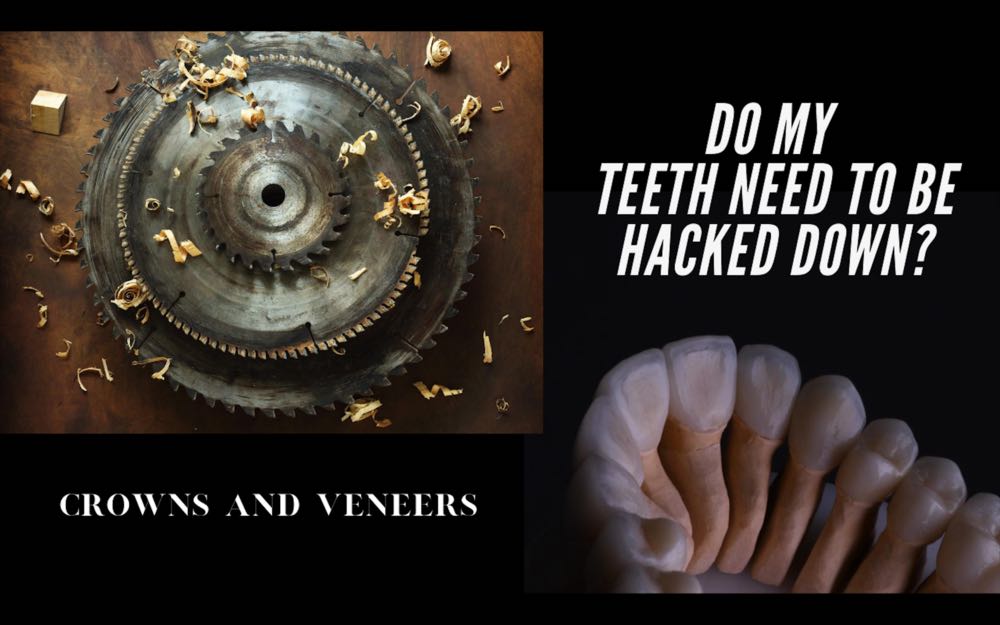 I am going to cover what modern dentistry can offer as far as conservation of tooth structure goes. Materials have advanced in dentistry and aesthetic porcelain materials in particular have developed in strength.

For many years there were just a couple of dental porcelains on the market, but the first ever porcelain was a powder liquid porcelain that was feldspathic porcelain. And that porcelain is still used today in different forms over metal foundations of crowns, but it's also still used to make veneers. The problem is that its very weak. You're able to artistically create beautiful restorations with it, but the the strength is poor. And so patients that have bruxism, or they generate a lot of force or friction on the restorations, for them this isn’t the greatest choice. However, this porcelain has evolved to stronger forms of that sort of feldspathic based porcelain.

There are also leucite-reinforced ceramics like empress and there is also the popular emax. Emax ha's been around for a while. I use it almost exclusively. It is incredibly strong, it can be bonded to tooth structure, and it is beautiful, and it's made in a variety of translucencies and all the shades you could possibly want.

What Emax has  allowed us to do in modern dentistry, is thta we can be so incredibly conservative with restoration, with the thickness of the porcelain when we're doing veneers, crowns, whatever it is, that we a lot of times barely have to do anything more than just kinda roughen the tooth up.

There was a company in the '90s and into the 2000s called Lumineers. Lumineers were made of serenade porcelain, and they were very popular. They marketed a lot, and they were very much in the pop culture scene. But the material is weak, it was weak, it still is weak. They're still done today, and you know, some dentists actually still use serenade porcelain, and still do Lumineers, but emax is just so much of a better material.

Now, there is another material that's come on in just the past couple of years from the standpoint of being more aesthetic. It's always been very strong and that's zirconia. Zirconia is the hardest, strongest porcelain in dentistry. It's technically a white metal. t's tooth colored in its basic form. Thats why its referred to as a porcelain.

It's incredibly strong, thin, and it's getting better as the technology advances, as they test out different formulations of it, it's getting more aesthetic, more translucent.That’s really the name of the game.

With porcelain, it has to be translucent for it to look natural. If you have a material that you can use it where it's very translucent, or it has like a medium opacity and then it has a higher opacity material, that's really kinda the best thing you can ask for, because in a situation where you need to really brighten up a tooth significantly, you want it to be as conservative as possible, you need something to be opaque, to block out that underlying tooth shade.

In the past when you were using the material Empress, which was kind of in the middle between the powder and liquid feldspathic porcelains and emax, Empress was popular for a really long time. And actually it's still a pretty popular ceramic, it's a good ceramic. One issue with it is though, is that it is so translucent. And so if you need to really brighten somebody's teeth up, it's difficult to do with that material. And that's where emax comes in once again.

When we're designing a smile in particular, you know, if somebody has a tooth that is worn off, and we wanna lengthen that tooth, we actually, a lot of times don't even have to cut on the edge of that tooth because it's already been reduced on its own naturally. When you envision these stubs, like cutting your tooth down to a stub, most of the time, disclaimer, it is sometimes absolutely necessary to do that when somebody's had a crown already, or they need a crown or there's a tooth that's malpositioned and the patient wasn't willing to do orthodontics to move it into a better position before doing the crowns or veneers, sometimes it's just necessary, it's just one of those things. But most of the time, the vast majority of the time, we can be incredibly conservative. We're talking tenths of a millimeter of reduction of tooth structure, which is almost nothing. And so what that leads to is very little postoperative sensitivity.

When you're thinking about it, whether it's with me, whether it's with another dentist, if you're considering cosmetic dentistry, and you've built it up in your mind, or you've heard horror stories from somebody else about their teeth being cut down to nubbins, or you had an experience yourself where you've had a tooth or teeth cut down to nubbins or really aggressively prepared, just know that modern adhesive and materials in dentistry make it so that that's not necessary anymore.